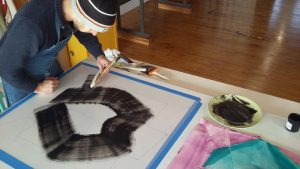 “Andrzej Zielinski animates our space by endowing our tools of anonymity with vibrant life. He has stretched them into resilience, infused them with singular chords of vital color — reinstated some of the emotional fanfare neutralized by digitalization. Painting communication.” — Klaus Kertess, Independent curator

Artist’s Statement / Read about the making of the work

Ouroboros Shredder, speaking to the Greek mythological concept of the cyclical nature of life and death, depicts the entire span of the printmaking processes of: drawn image (matrix), printing/editioning, and destroying the matrix into one narrative. This lithograph is printed onto one sheet of 31″ x 47″ printmaking paper, slit in seven locations, and folded together eighteen times in an uninterrupted fashion à la the Japanese art of kirigami, which is a variation of origami that includes cutting of the paper. No parts of the paper are cut off or apart, even to the inclusion of the registration punch holes, normally torn off during the curatorial process.>> Read more / about the making of the work.

This grouping of seven shredder monotypes was made in context of an analogous relationship between the mechanics of a paper shredder, and that of a lithographic press. This process of pushing and dragging applications of printing ink yielded unexpectedly rich results, manipulated by changing the papers orientation in context to the scraper bar.  >> Read more.

These five stone drawn lithographs are inspired by everyday mishaps that occur with mobile phones which render their functionality useless. The black and white palette emphasizes that the phones are no longer functioning devices capable of turning on, and therefore thwart our expectation of a bright screen to escape into. Additionally this palette harkens to an age where news was printed in black and white on paper: newspapers. Nonetheless, these disenchanting signs are tempered by the humorous circumstances of the mobile phone’s tragic demise.

The Mishap Suite is printed on an elegant Japanese Unryuo mulberry paper, embedded with golden threads that speak to the precious metals that are needed to make such devices work through their conductive and stable properties. Of course gold has been used by human cultures all over the planet as the metal of choice to portray God, Goddess, and deities. Gold, also, is frequently given as award for great human achievements. Therefore, the viewer must connect and consider their relationship to a mass produced device that is possibly touched and interacted with more than any other object. An object which controls the layers of our lives. >> Read more.

Andrzej Zieliński was born in 1976 in Kansas City, Missouri. He lives and works in Berlin, Germany, Lawrence, Kansas and Canberra, Australia. He received his MFA in painting and printmaking from Yale University in 2004 but also makes sculptures which were in a break out exhibition titled Open Sourced at the Nerman Museum of Contemporary Art in 2015 that was accompanied by his first monograph. Zieliński has been showing internationally for over twelve years. Upcoming exhibitions included solo exhibitions at Haw Contemporary, Kansas City, Missouri and at the end of the year at the Mattatuck Museum in Waterbury, Connecticut.