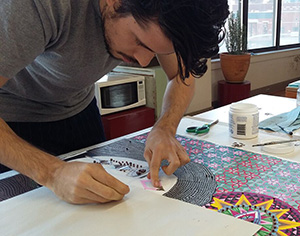 "Asad Faulwell is not afraid of hard work. When he takes on a subject, such as the women involved in the Battle of Algiers, he goes all in, investing the time and labor required to realise his vision, the way he imagined it. It is that hard working quality that gives his works the dazzling amount of details and amazing intricacy."
- Yetkin Nural

Artist’s Statement / How the work was made

Dajmila, Inspired by Gillo Pontecorvo’s film “The Battle of Algiers” attempts to show how female combatants in The Battle of Algiers were both aggressors and victims, victimized both by their French adversaries and ostracized by Algerian society. The background references patterning that might be found in religious artwork or in that commissioned by a monarch. This is intended to raise these women out of anonymity and into the spotlight, placing an aura of importance around them. In addition this work references the long history of artists making work depicting Algerian women, such as Delacroix and Picasso. While the anonymous women in the Delacroix and Picasso’s works were shown as sexual objects, the woman in this print defies simple classification. She is both aggressor and victim, existing in a moral grey zone much like the grey tones in which she is shown.

Asad Faulwell is a Southern California based artist who received his BA from UCSB in 2005 and his MFA from Claremont Graduate University in 2008. He was the recipient of a Joan Mitchell Foundation MFA Grant while at CGU in 2008. Since finishing school he has had in solo exhibitions in Los Angeles, New York, Kansas City and Dubai and has taken part in group exhibitions at The Nassau County Art Museum, Nerman Museum of Contemporary Art, OCMA and L.A. Louver among others. His shows have been written about in ArtForum, The New York Times and Harper’s Bazaar Art among others. In 2016 his first monograph entitled “Asad Faulwell: Les Femmes d’Alger” was published by Zero+ Publishing. Asad had his first museum solo show at Nerman MOCA in 2013. In 2018 he will take part in “In the Fields of Empty Days” a group show at LACMA. His work is included in many private collections as well as the permanent collection at Nerman MOCA, LACMA and at OCMA. Asad is represented by Kravets/Wehby Gallery in New York, Denk Gallery in Los Angeles and Lawrie/Shabibi Gallery in Dubai.