The story here is of a gentle sway, a sigh, and a settling into. The lines respond to each other one by one, building upwards and compacting downwards over time. This moment in time is not a crescendo, but rather, a much-needed pause afterwards. A vibrating harmony of everything at its brightest and best. 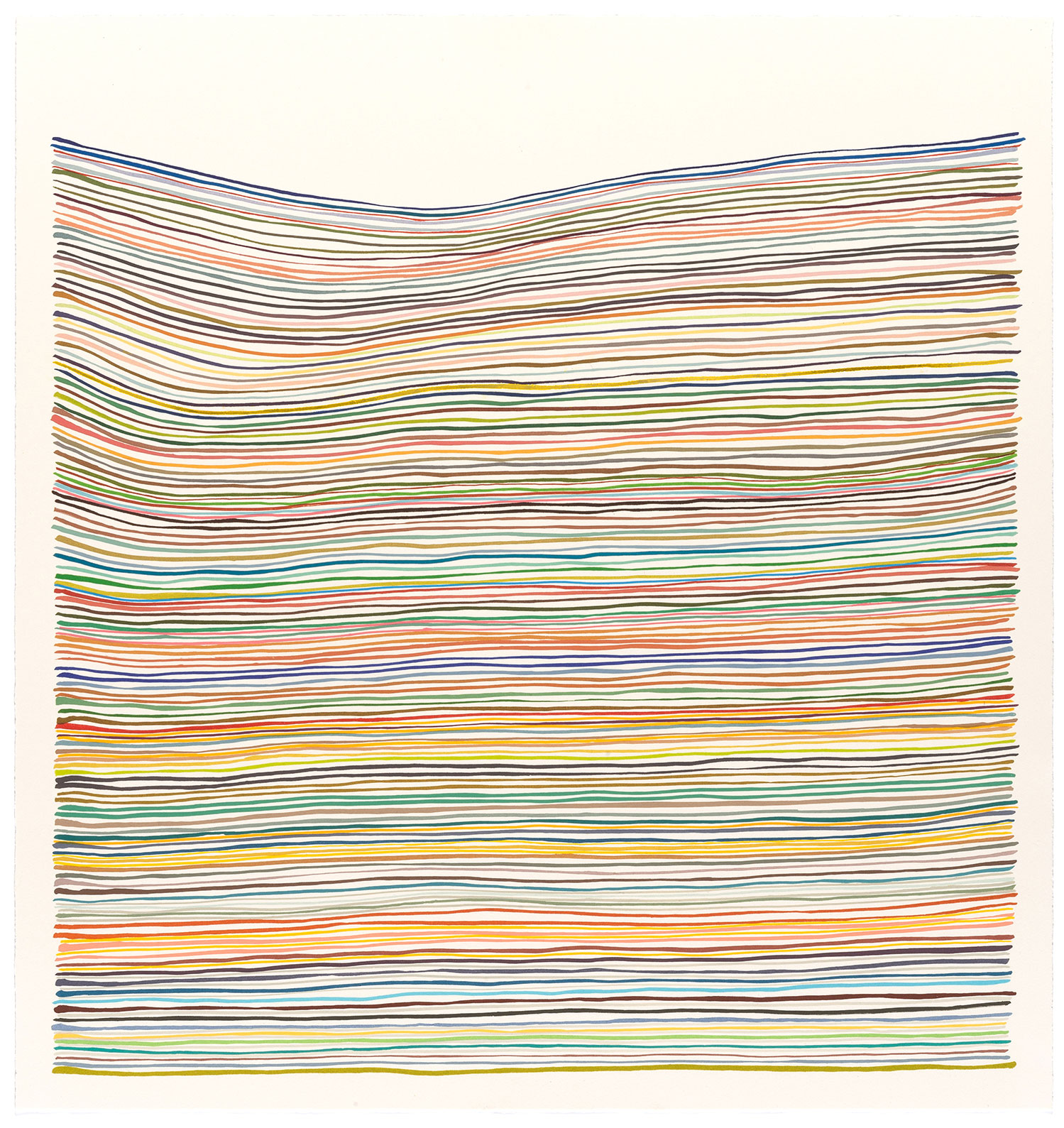 113 colors is a lot to ask of a lithograph. I’d never even considered this an an option before Kansas City artist, Laura Berman, proposed the project late last winter. She brought me a lovely little painting and asked if I would consider doing a piece together in this vein, but as a 100-color print. It was an audacious proposal, and I loved it immediately. 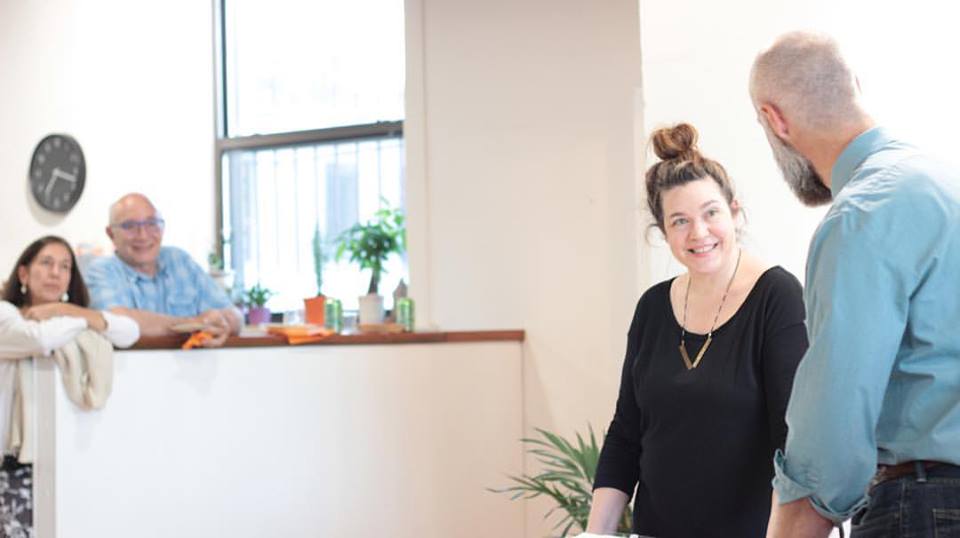 When the Bedrock studio buildout had been completed and we were able to begin our collaboration, Laura painted many mock ups in black and white to discover what size and line work would be most successful. And eventually, after much trial and error, we decided to return full circle to the same form used in her little painting. A beautifully resting block of lines with an elegant fold at the top.

With the composition laid to rest, I needed to find the process of engineering HOW to most economically accommodate 100 colors without using a hundred plates — a very costly prospect. With her mockup in hand, a quiet studio, cup of coffee, and a carpenter’s square, I pulled apart every line, creating by the end of the day a master map to follow when rendering her plates. This map allowed for seven lines, printed in seven separate colors, to exist on one plate; sixteen plates in all. 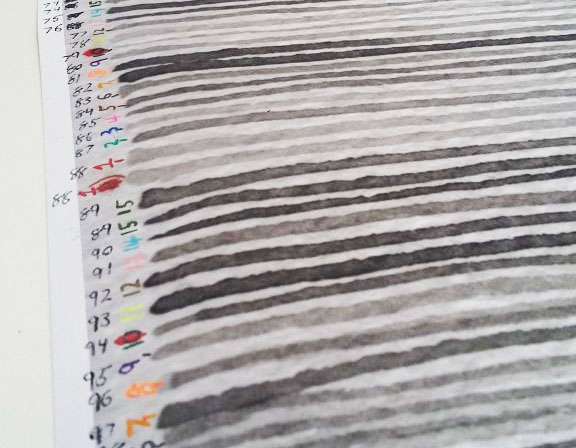 Days later, Laura arrived at the studio appropriately wearing a stripped shirt, ready to paint all the mylars which later would be exposed to photo litho plates for printing. Starting with the bottom line first, Laura painted repidiograph ink with brush, but had a hard time with her hand chattering on the mylar surface. Too much friction. No glide. Stuttering lines. Cleverly, Laura rigged a glove out of paper towels and masking tape which allowed her hand to glide over that long distance with graceful marks.

In this manner, one mylar after another, seven lines at a time, Laura painted until the entire composition had been rendered. Beautiful to watch her steady hand at work! 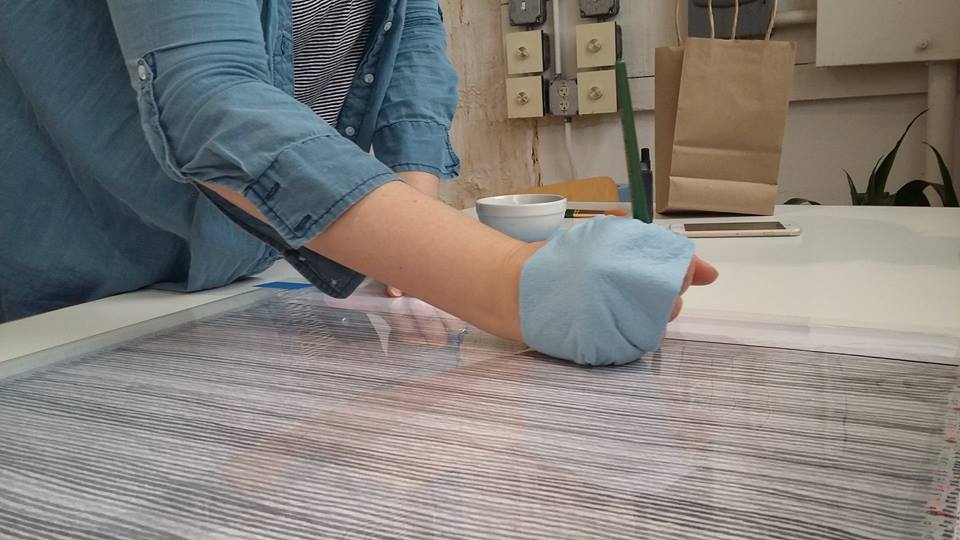 The next obvious consideration in building this image was color. And admittedly, I was nervous about this part. It would be so easy for the colors to play together all wrong. There are just so many, and in the end, easily and very conceivably, the work could come out muddy and wrong….. But Laura arrived early one morning, the heat pouring in the door behind her, with an arm full of swatches painted with guache.

Squares on paper pages. Where is she going with this, I’d wondered? 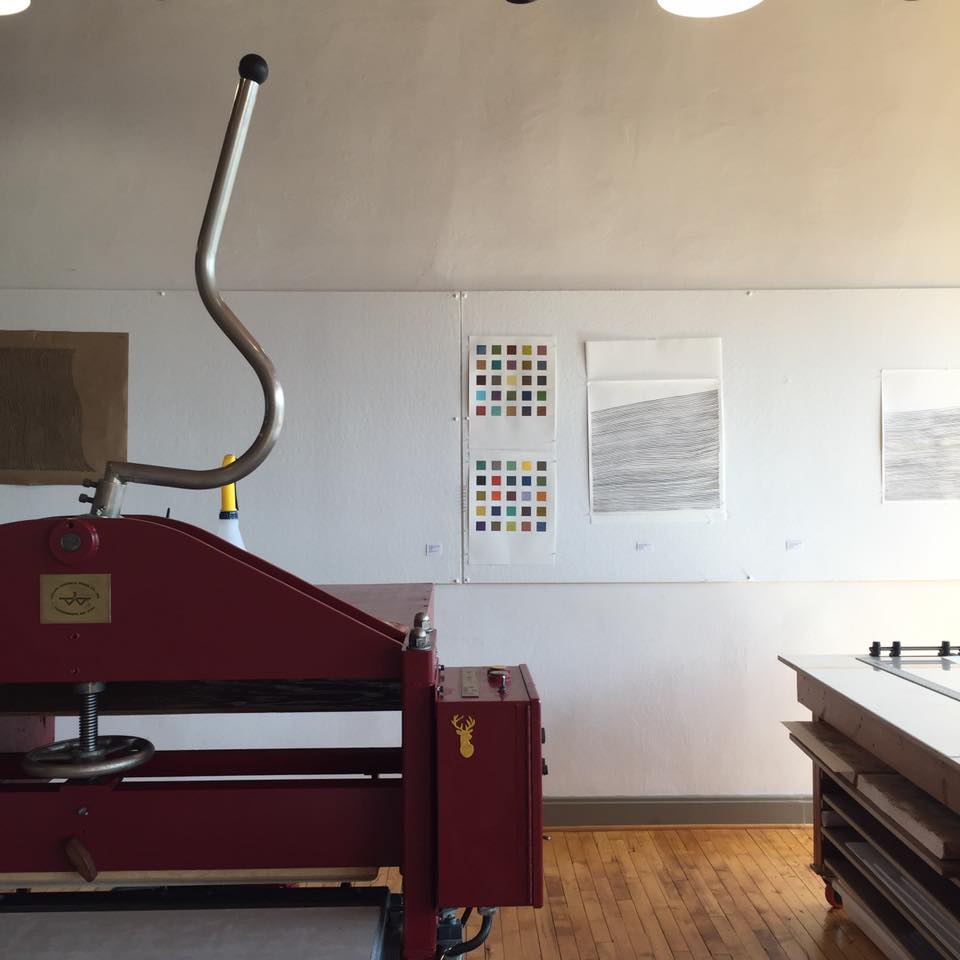 We cut the swatches out, and without word, Laura began separating and sorting, grouping into families fluidly. Obviously this was an intuitive process for her, and this particular moment remains one of the highlight experiences in collaborating with Laura, watching her deftly compose color as a musician would music. When finished, Laura had arranged a great long line of 103 color swatches into beautiful families of colors, each belonging and distinct, yet melding into its corresponding family with grace. We took turns up on the ladder looking and agreed, neither would change a thing! Lastly, each color was numbered by order from 1 to 103, as well as assigned a designation number corresponding to which plate it belonged. A composition was born! 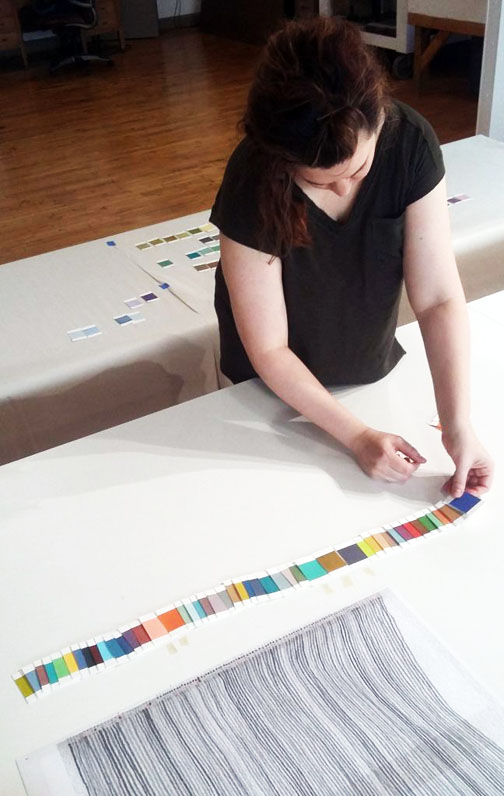 In all things hand printing, one task begets another. The next in hand was mixing all these colors. For those of you who do not know, lithographic inks are mixed by hand, as a painter mixes their colors, rarely ever using a color strait out of the can. And when finally we could work a schedule between her kids and mine, her work and mine,

we chipped away at those inks, matching one at a time, all day long. For two weeks. In the end, we were rewarded with a table COVERED inch for inch in ink packets. A sight to behold! 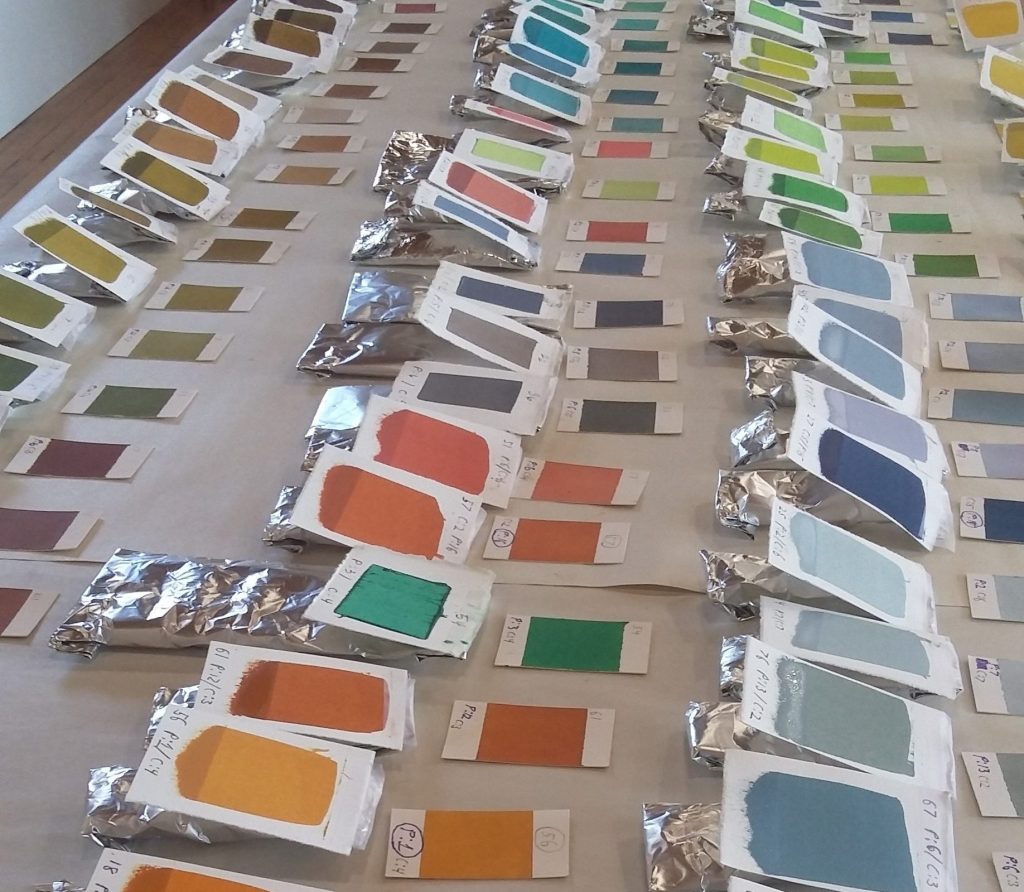 At long last, other preparatory processes aside, we were ready to begin printing her edition. Normally, projects go through stages of proofing to evolve the image, but due to the time and resource intensive nature of this project, we decided to print this “suicide.” Which is to say, outcome unknown. Blind. Whether folly or success the only way to know is to do the work of making the print. It was to be a long road ahead.

At best, I figured that working full time, it would take me three weeks to print the edition. But things always come up in hand printing. That’s a given. So probably it would be more. Which was true.

We ended up adding two more plates along the way, bringing the total number of colors to 113 and stretching the printing to six weeks from beginning to end. My right hand man and press assistant Mel Moscoso left for vacation (to propose to his girlfriend — she said yes!), so I had to cobble together assistants left and right, eventually parceling together five different people for different days of the week. And then, two days into the printing I discovered my plate backer on the press was not level.

A day repairing in a frenzy. Later in the edition, the press bed stopped moving. At all. Again, out with the wrenches. 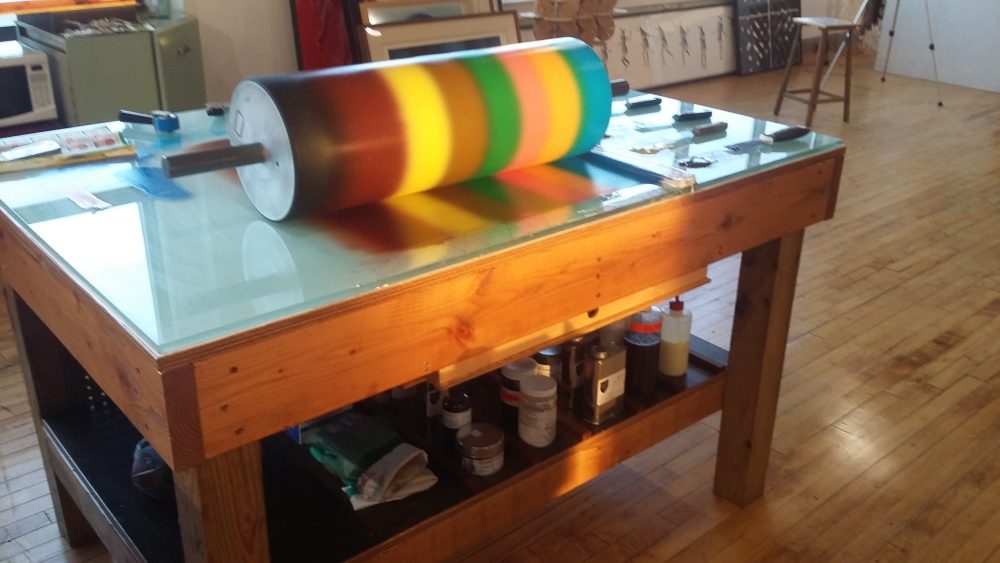 Mostly, the printing became a daily task of showing up, setting up, and diving into the seven or eight hours it took to print all 36 sheets in the seven colors of the day. A slow process printing seven colors on one plate, as the “tracking” on the roller has to be perfect, never allowing for one color to migrate into another. As well as the many considerations that go into a well-inked plate: ink modification, subtle hand pressure on the roller, speed of the roller, amount of water on the plate, press pressure, etc… 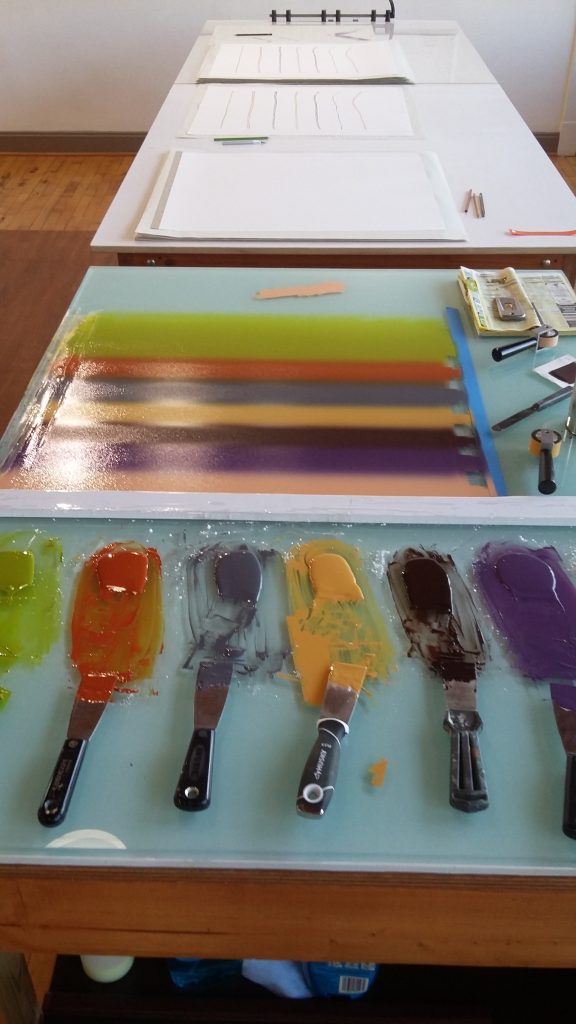 Some interesting facts for those who like to quantify: With the edition completed, each sheet of paper was printed 20 separate times to compose the final image. And each plate needed to be inked six times before printing a sheet of paper, which means the plate was inked 216 times in a seven-hour period to get the whole edition printed in the daily colors.

By the end of the edition, when the last color was printed, this means that I’d inked a plate 4,320 times to complete the edition. No wonder I felt sore!

And then there was the gold leafing……. so thin and maddening to manipulate! Very slow going. In the end, the leaf would not release well from the paper, and each line had to be painstakingly razor cut to release the excess leafing, a process which took about a half hour per print. 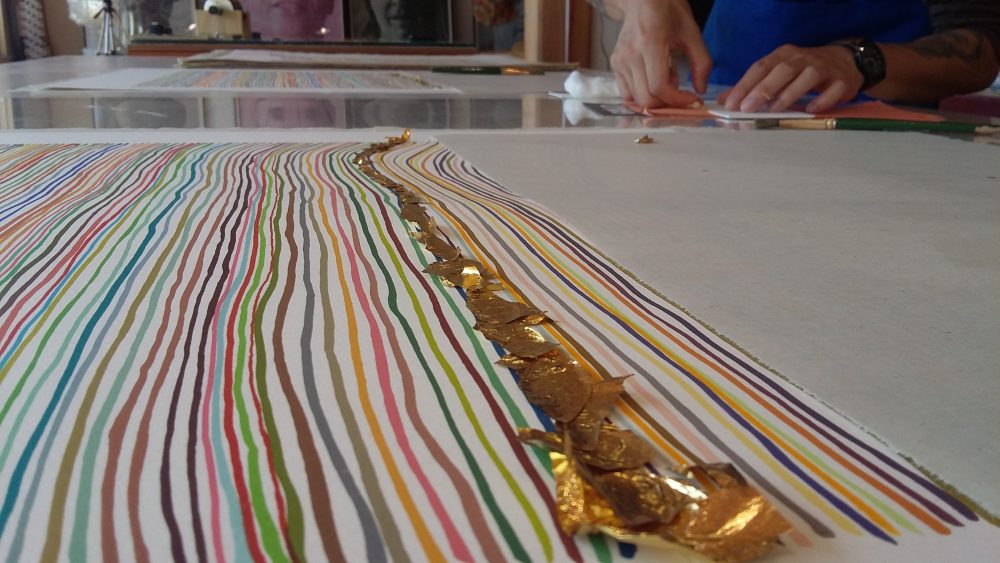 The act of printing Laura’s work was intriguing and patience-building. Intriguing to watch the composition come together seven colors, and seven lines at a time, day after day. Each day the piece changed, took on more shape and depth of color. Beautiful to watch it turn from seven disparate colors on a page, into a vibrating tapestry, a woven mass of composed color.

The final result is arresting and capturing, and something which the viewer gets lost in whether viewing up close, or at a distance. This is a special piece, won through serious vision on Laura’s part, and serious insistence on mine.

Longevity is a noteworthy print in Laura Berman’s oeuvre, and one which I am quite proud to have been involved with.

"Longevity" references time and space through its progressive cascade of lines. The dynamics of geology inspire this image. Each line responds and reflects its neighboring lines, symbolizing the ricocheting effect of earthly or even human interactions. Any action can create a lasting effect, and even the smallest shift can grow into a large change over time.
Each of the 113 colors in this print are singularly beautiful on their own, and together they create a unique harmony as well. My goal was to create a very diverse group of strong colors and to push myself as a colorist beyond the usual solutions. I work very intuitively with color, often asking myself, "is this one yummy enough to print?". "Longevity" expands on this to create families, striations, and eventually, build an architecture of colors into its unique form.

We're honored to have been featured in KC Loves in the making of Laura Berman's Longevity. Check it out here.