U.S. Poet and Essayist Anne Boyer joins with artist Andrzej Zielinski to collaborate towards the creation of a box set of poetry conjoined with original art. Based on the concept of 13 substances as 13 poems/artworks, this project proves to illuminate the uniquely fierce and anti-categorical mind and words of Anne with the materially based work of Andrzej.

Anne Boyer is a U.S. poet and essayist, and the inaugural winner of the 2018 Cy Twombly Award for Poetry from the Foundation for Contemporary Art and a 2018 Whiting Award in nonfiction/poetry. Boyer’s books include The Handbook of Disappointed Fate, The Romance of Happy Workers (Coffee House 2008), My Common Heart (Spooky Girlfriend 2011), and the 2016 CLMP Firecracker award-winning Garments Against Women (U.S., Ahsahta 2015; U.K, Mute 2016) which Maureen McLane described in The New York Times as “a sad, beautiful, passionate book that registers the political economy of literature and of life itself.” In 2014, Boyer was diagnosed with highly-aggressive triple negative breast cancer. Writing through cancer treatment and in its disabling aftermath, Boyer is now in the final stages of this work about cancer, care, and having a body inside of history, called The Undying, forthcoming from FSG in August 2019. Some of her essays about the politics of care in the age of precarity have appeared in Guernica, The New Inquiry, Fullstop, and more. Boyer was born in Topeka, Kansas, in 1973, grew up in Salina, Kansas, and was educated in the public schools and libraries of Kansas. Since 2011, Boyer has been a professor at the Kansas City Art Institute, a four year college of art and design, where she teaches writing, literature, and theory in the School of the Liberal Arts. She lives in Kansas City, Missouri. 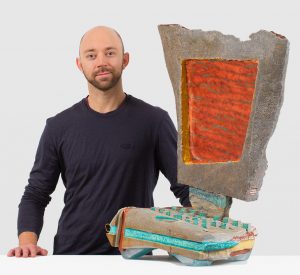 Andrzej Zieliński was born in 1976 in Kansas City, Missouri. He lives and works in Berlin, Germany, Lawrence, Kansas and Canberra, Australia. He received his MFA in painting and printmaking from Yale University in 2004 but also makes sculptures which were in a break out exhibition titled “Open Sourced” at the Nerman Museum of Contemporary Art in 2015 that was accompanied by his first monograph. Zieliński has been showing internationally for over twelve years. Upcoming exhibitions included solo exhibitions at Haw Contemporary, Kansas City, Missouri and at the end of the year at the Mattatuck Museum in Waterbury, Connecticut.