The "Chain Reaction" Series, Wendell Gladstone's first project with Bedrock, is a variable edition of nine embossments treated with custom-colored, pearlescent powder. A gorgeous dance of image, color, ingenuity, and hard work, "Chain Reaction" evokes feminine strength and liberty from the central figure's personal prison. Though Gladstone's image is referential to his canvases, the embossed treatment he created in collaboration with master printer Aaron Shipps results in a series of distinct, sumptuously rendered prints: a triumphant contribution to Gladstone's body of work.

Initially, Wendell was interested in pursuing the making of a lithograph during his time at the shop. However, he quickly came to the realization that he did not want to make new work that was derivative of his painting practice. Instead, Wendell expressed his desire to work in a way that honored the sculptural, bas-relief qualities of his paintings while retaining a tactile quality distinctly different from that of his paintings. As such was the case, Wendell inquired about the possibility of doing an embossed image.

From an outward perspective, the making of an embossed artwork seems deceptively simple. One cuts a block, presses paper into it with a printing press, and … voila! But this is not the case at all. To make an embossment, particularly of the size and complexity Wendell wished to make, requires a perfect dance of materials and how they are used. Though simple in appearance, the making of such an image is anything but.

Opening up our forward momentum on the project, I set about the process of sketching out rough notes: What kind of material we would use for Wendell’s block? How it would be cut? What types of paper would work best to retain the crispness needed, levels of dampness in the paper, etc……

Typically, Wendell begins his process by rendering an image in Photoshop until a basic composition is arrived at. That composition is projected onto canvas, acting as a guide for the blocking in of basic forms. As such was the case, we decided that Wendell would create this composition, similarly, in Photoshop, only this time in a way that allowed for the reading of depth, rather than color — a detail which becomes relevant once the block is ready to be cut by a CNC machine, which this would be.

Thusly, I began the process of searching for the right material to have the image cut into, spending a few days on the phone requesting samples and comparing materials, eventually finding a signboard that could be ordered in any width, compression strength, and hardness one desires. This was a material specifically designed to be machined but is able to be sanded and worked afterwards.

Next came the process of finding a machine shop that would cut a three dimensional image into the block with a CNC machine, in a manner that retained the smallest details and preserved smooth transitions. Invariably, I quickly found out the absurdity of this demand as machine shop after machine shop outright rejected the job. Feeling desperate, I floated the idea past local artist Mike Lyon (whose specialty is in making artwork with CNC machines). Initially Mike balked, as did everyone. It would take nearly four days to cut the block, he explained, and his concern was for burning out his machine, or blowing out the router bit, thus ruining the block. Perhaps my desperation was apparent because Mike eventually agreed to take the job. And to our great fortune, Mike’s technical wizardry at creating a toolpathing file which would allow his machine to cut up and down, and side to side sensitively, was like manna from heaven. Within several days, we had the block on the machine and the router bit maneuvering deftly across the surface, inch by inch, cutting its way from the center of the block outwards. Days later we had the block in hand, with no end of gratitude to Mike for his efforts and ingenuity! 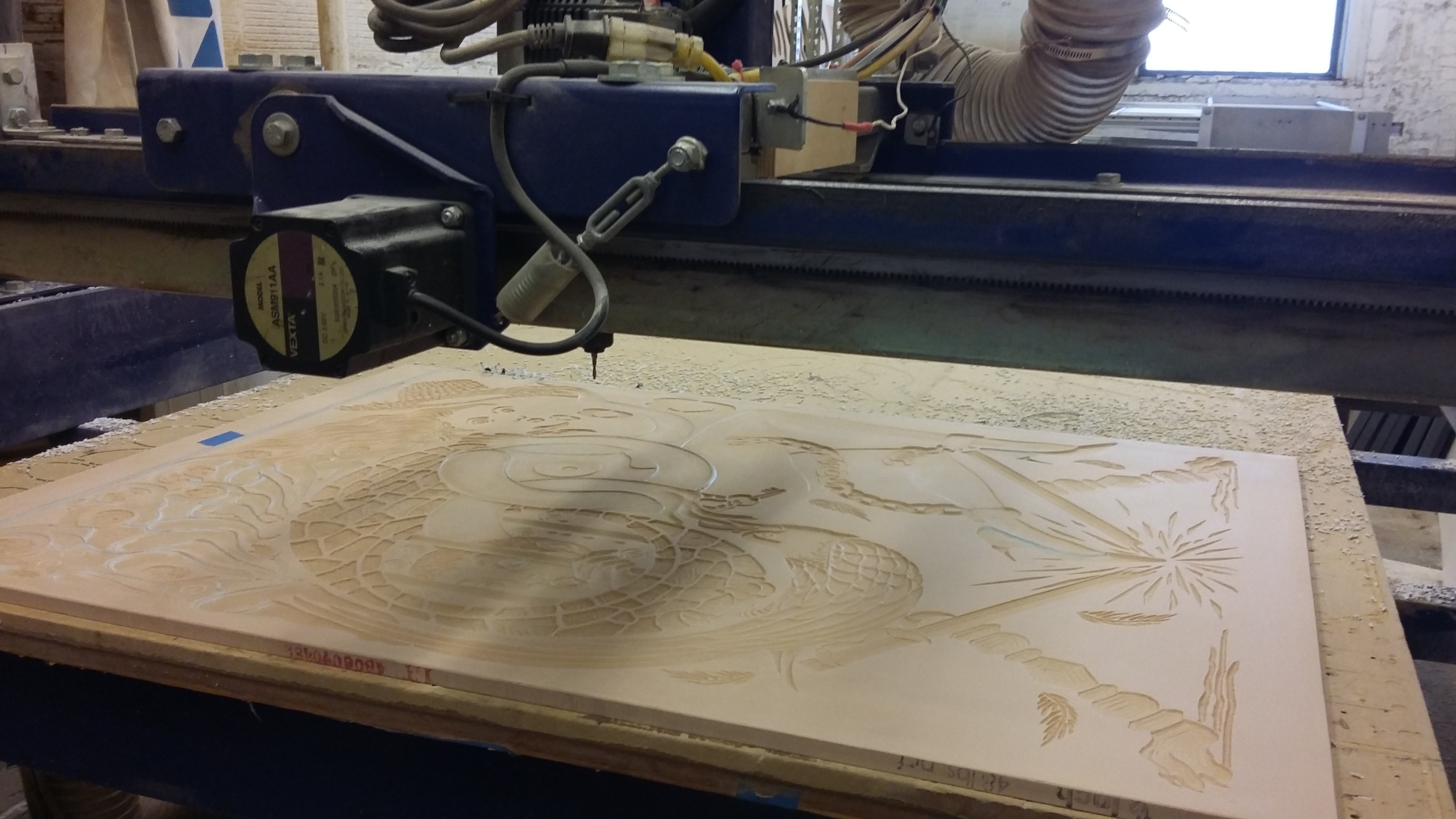 Beautiful though machines are, they are rarely the panacea we wish them to be in the world of handcrafted objects. As deftly as the CNC had managed to cut the image for “Chain Reaction” into the block, upon close inspection one quickly could see the incremental movements of the router bit, giving the image a pixelated look, curves made by short 90 degree movements. It quickly became apparent the micro-world of hell I was in for.

Every square inch and each and every line needed to be sanded smooth. For the many twisting labyrinths of minuscule detail, I armed myself not with a Dremel tool (too jerky and easy to mess up detail with), but with sanding Dremel bits themselves pinched between thumb and forefinger. Thus began the task of smoothing.

Podcast after podcast, coffee after coffee, day after day, the fingers lost sensation, went numb, then flared with pain. By the end of the day, the eyes felt as though they had been twisted out of my head.

Despite the discomfort, the effort is always worth it, and a few weeks later the initial shaping was finished, leaving the task of building up weaker lines with Bondo, then sanding those areas back to a pleasing shape. Sculpting.

At last, block finished, I was ready to begin the primary considerations for proofing: What types of paper would best be suitable. Running though variations of handmade papers vs. standard printing paper, and combinations of adhering one to the other, thus doubling the thickness of the sheet, eventually lead me to find, for our purposes, a double-ply 300 gsm standard printing paper yielded the perfect malleability to crispness ratio, while drying relatively flat and retaining detail after drying. At least on our little test block.

That said, the size and complexity of cuts on the full sized block dealt up its own set of issues. On pulling the first large proof, I quickly found that a large crease would form from at the center of the paper to the edge, making the impression worthy of the trash can. As the dampened paper is rammed under high press pressure into the irregular patterns and depths on the block, a wave formed which eventually crested into a deep crease. Unless this could be solved, everything prior to this was absolutely for naught.

Ruining impression after impression, slowly I found the right balance of dampness in the paper to pressure on the press, managing to pull some consistently good impressions. And yet, upon drying, the fibers of the paper tugged themselves tight again, warping the impression badly…… Yet another detail to resolve!

All this said, pending the resolution of these final considerations, Wendell felt pleased with the results, claiming that the finished impression looked like a carved bar of soap. And indeed, each detail of his hand, flowing one into the next, looked like elegant ivory…… I had never seen an embossment of this size or complexity, and found myself soaring with the gratitude that comes from staying persistent and finding the way toward something beautiful and unique. Something right.

Nearly a half a year later, the edition itself printed, Wendell and I still wrestled whether to leave the impression as is, on bare paper (what is know as a blind embossment) or, to add color. After some conversation we decided that Wendell would fly in from L.A. for a few days and we would have a shot at his airbrushing some of the impressions, giving a variable edition in the end.

Wendell’s first day in the studio, we were charged and ready to make things happen. Music on, his area draped in tarps, Wendell readied his air gun and let it rip.

The first layer of bubblegum pink acrylic paint didn’t go down well, so we decided that he would try another layer to even it out…… layer after layer, we discovered, somewhat with horror, that paper and airbrush do not play well together. The acrylic lays on top of the fibers of the paper in a coarse and sugary texture, giving unsatisfactory tonalities and textures. Wendell tried again and again with that first impression. While Wendell worked, I dug down into the arsenal of possibilities, eventually landing at an idea to try using pearlescent powders instead of acrylic paint to color each impression. It would undoubtedly be a pain, but if it worked, it could be well worth the effort.

Starting with a cut up scrap of an impression, I painted on a layer of printing ink, then brushed on pearlescent powder heavily, working it into the ink. Each of us immediately let out simultaneous sighs of relief and exclamations of “Hell yes!” It was apparent we had a solution! Not minutes later, we were plucking jars of different colored pearlescent powders from the shelf at the art store.

Back at the studio, Wendell began mixing custom colored powders, writing recipes for each, into a vivid pallet of eight “70s makeup colors,” each with its own custom name — a nod to its inspiration.

Together we dove into the process of brushing a layer of transparent printing ink onto the first impression….. Something akin to brushing out thick honey as ink is NOT designed to be brushed. But for these purposes, it is archival and it works beautifully to fuse the powder to the surface of the paper once dried. And, it dries slowly. All in all, working together it took us the better part of four hours brushing and chatting to coat the surface of the first impression. Proceeding this, using a large brush and a bowl full of Wendell’s custom-mixed pearlescent powder, I began the process of moving a pile of powder across the impression until it had been fully coated. This process continued over a few hours, allowing the ink to absorb the light powder before applying more. Once the impression had taken all it was able to absorb, it was airbrushed clean, then polished back lightly with a lint-free rag, giving a beautiful metallic luster.

And there it was, so glorious in its luster and personality, the first of nine variations of “Chain Reaction.” The both of us stood, grinning like fools at the results.

Wendell Gladstone set out to create something new in a different medium (initially unknown to him), and something which was divergent from his painting practice. In the end, with persistence, a bit of vision, and one hell of a collaboration, Wendell and I found our way to “Chain Reaction”’s vivid personality. I think I speak for both of us in saying that the results speak for themselves.

The central figure in “Chain Reaction” carries a sack of cobbled stone while a whirlwind of unfurling limbs and snapping chains spiral toward a climactic explosive thrust of a high heel pump and a radiating kiss goodbye from a series of floating lips. A portrait of Sisyphean liberation from a personal prison.

For my first introduction to the print medium, it was important for me to work in a manner that wasn’t derivative of my paintings, yet would retain some of the tactile qualities of my overall practice. Embossment allowed for that balance, opening up new ways for me to expand upon my approach to drawing and composition.
Each distinct impression in this variable edition of nine has been custom colored with hand-mixed pearlescent powders in a palette inspired by 1970s eyeshadow colors.