Two Things Happening at the Same Time is a continuation of Rashawn Griffin's investigation into materiality, drawing, and identity. Starting by re-imagining the "Griffin" family tartan in new and saturated colors, the image was created in the lithographic medium, each plate hand rendered and hand printed on a direct pressure lithographic press, composing the final image. With additionally added hand elements, such as plastic eyes, thread embossment, sewn elements, and Chine collé, this pattern is abstractly collaged, weaved, and manipulated into portraiture, both masking and revealing identity in two ways at once.

The first visit I took to Rashawn’s studio, as we stood in front of a wall covered in his work, he gave me this warning: “What I do looks like it was done quickly, but I labor over these. Most pieces take a long time to finish.”

It’s true. Rashawn’s art does have a fluid, easy going nature to it, but looking under the surface, a world of composition, interplay of shapes, textures, and color compositions become apparent. And it was exciting to see the possibilities that lay in the translation of Rashawn’s skill set into the print medium.

As this was Rashawn’s first foray into making prints with a collaborator, I wanted to warm him up with some days of easy going monotyping at the press. It became quickly evident that underneath his laid back nature lies a clear-seeing ability to absorb a new technique, adopt it, then spin it to make it work in his own lexicon. Creative fluidity.

We mixed his colors, and I gave a few small instructions. Rashawn dove in. One hour passed, and then two. He worked his painting on the plexiglass for around three hours until he felt satisfied to commit it to a piece of paper; the first pull and always a steep learning curve. We placed the dampened sheet down onto the plex and ran it through the press. Pulling the sheet up, a grin appeared on Rashawn’s face: “This is fun!” 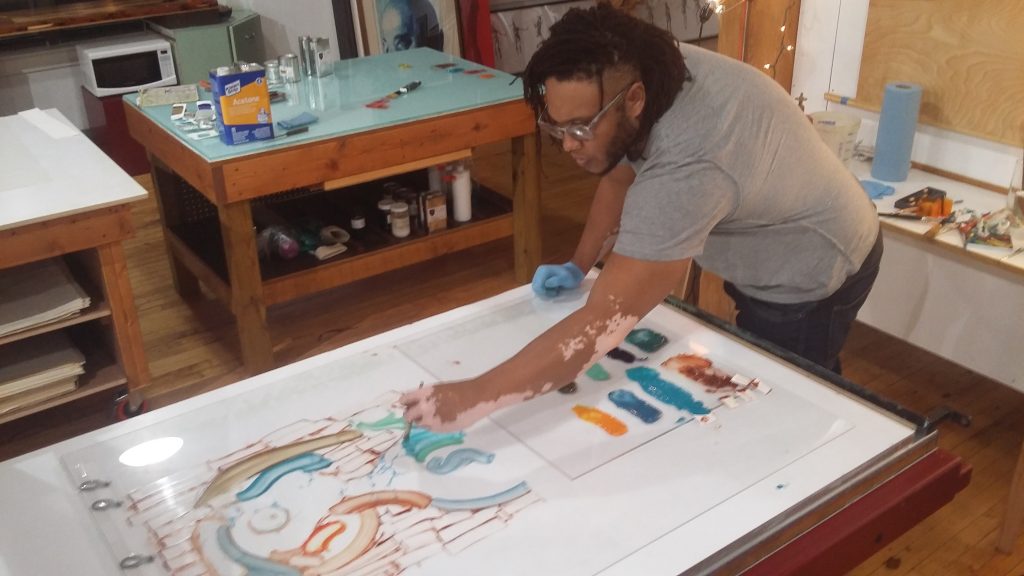 Day two of monotyping felt like he had been doing it for years. And it was a joy to watch the confident, yet playful manner in which he digs into his work. The resulting two pieces are the two published here on the website. 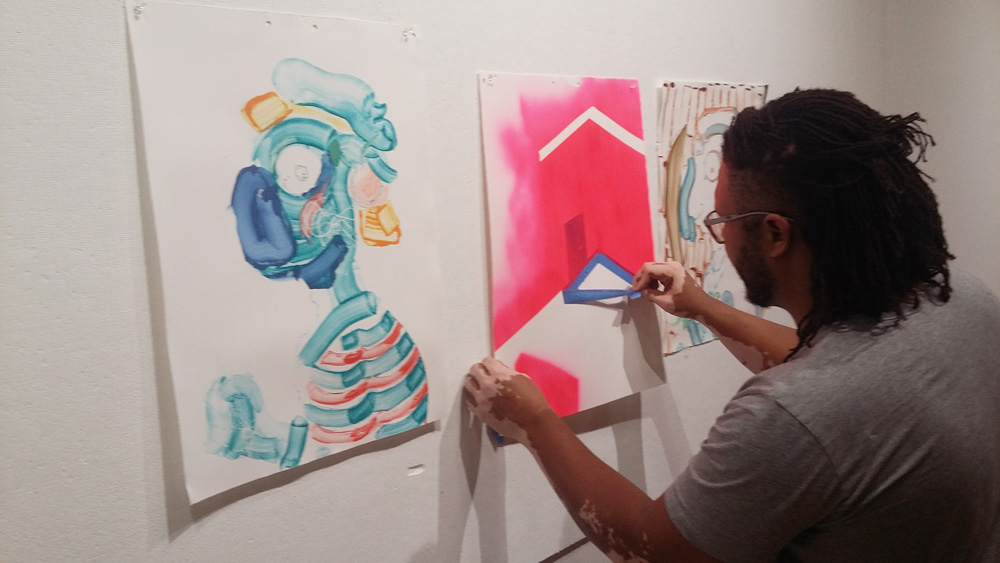 After his days monoprinting, it was time to transition into starting his lithograph. For many artists, even the best ones, making their first lithograph can be an abstract, mind bending notion that applies many rules to an otherwise fluid art-making process. Its halting to absorb the information on the front end, but once understood, a mountain of possibilities lies at the artist’s feet.

Because Rashawn wanted to work creating layers of his “Griffin” family tartan, we decided to have him paint up a series of mylars, which he could stack, cut apart, then re-assemble in a more intuitive process than committing the mark making to plates. Having set him up with a number of different materials to draw and paint with, Rawhawn set forth to combine some traditionally used materials with non-traditional ones, coming up with a combination that allowed him to brush onto mylar in a way that appeared almost wood-like in its texture. And in the allotment of a week, Rashawn worked nights, settling into the studio painting, layering, cutting apart, and reassembling his mylars until he was satisfied they were ready to be exposed onto photo-litho plates. 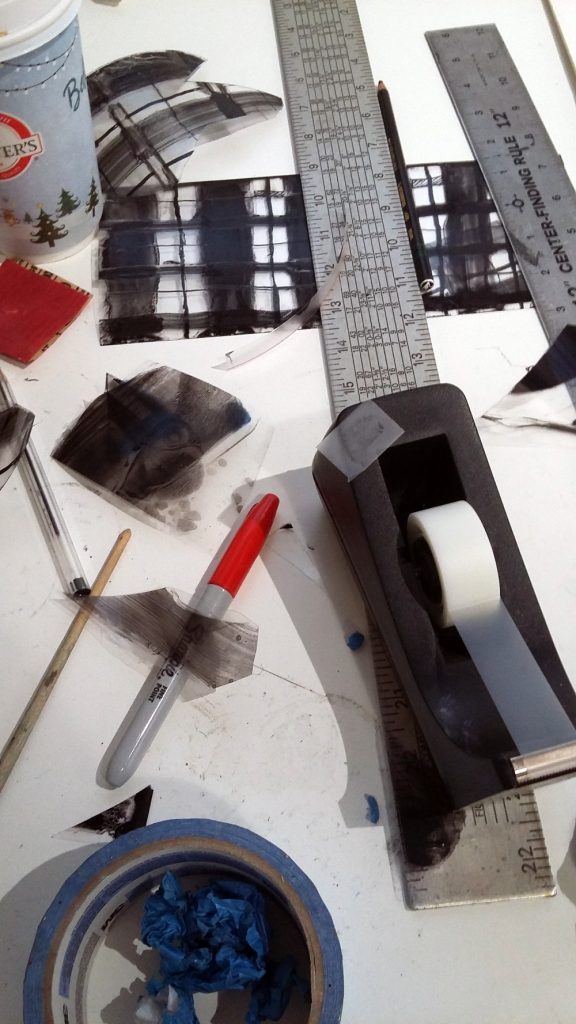 The next cat to skin was color. From the beginning, Rashawn asked for fluorescent colors, and in the hand-printing world, there are no such thing as fluorescent inks. I did some research and ordered fluorescent pigments to augment the inks with, but still found the results disappointing. After more calls, I found a company that sold fluorescent offset printing ink and was able to speak with one of their ink chemists, who proved very helpful in defining a type of ink that would not dry too quickly. When they arrived at the studio, and I saw what I had, I could not start proofing fast enough. They were just what we had been searching for! 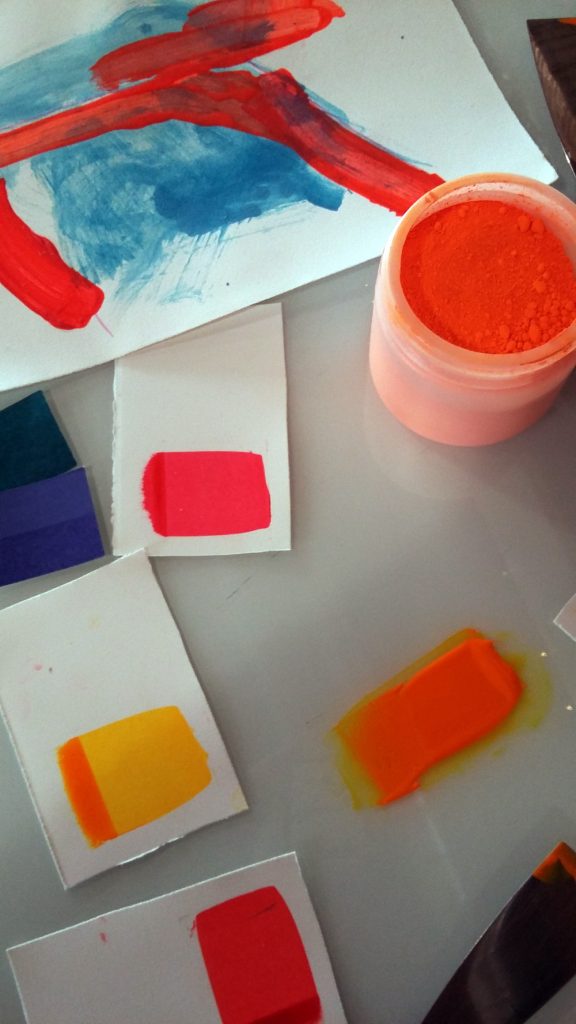 The first round of proofing was exciting for both of us, until around the second-to-last plate, when a dominant yellow virtually killed the entire composition. Still, I finished it up and tacked it to the proofing wall, leaving it until the next day. The next evening we spent a good three or so hours just looking and talking about what next. Periodically Rawhawn would pull the proof down and cut a few shapes out of it,then put it back. He also asked if we could make a “cheesy fade in pink and blue, fading to purple.” So, sure. I rolled out some ink in a blend roll on the press bed, and we printed a quick and dirty mockup sheet of paper which Rashawn took, still wet, cutting it apart and tacking it into place onto the now completely cut-up proof. The deletion of the dominant yellow plaid and the addition of that fade behind the background figure’s head was a pivotal change in the image, and one which set the tone for the rest of the composition. As is apt to happen, one decision sets the composition heading in an entirely new direction. 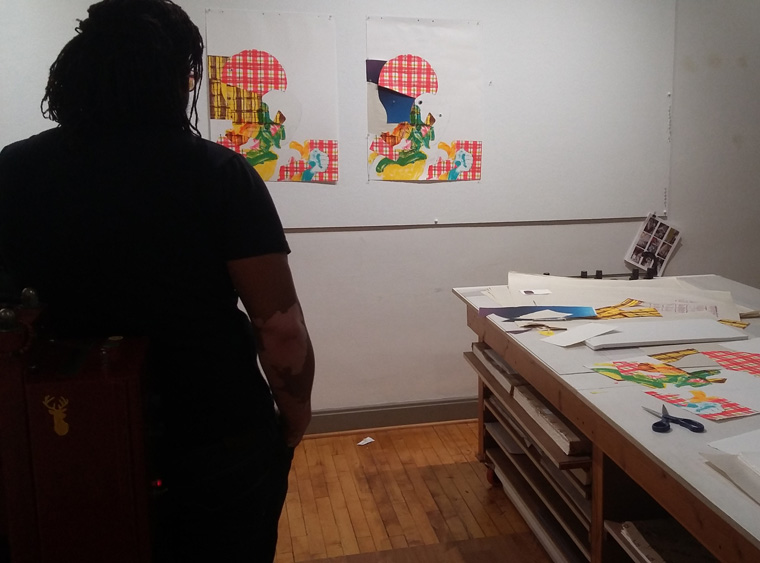 Having made a few more plates for the flat color areas and blends and a whole lot of deletions taken out of the existing plates, we set into the next rounds of proofing, each one finding its way closer to the center — each proof considered equally consciously by Rashawn,who I had now come to trust would make very few decisions quickly or haphazardly.

By the fourth proof, we had arrived at the final composition of “Two Things Happening at the Same Time,” and Rashawn made his final trademark additions of three areas of hand stitching, as well as the addition of the plastic eyes. We also decided to drop a ball of thread onto the inked yellow plate before placing down each impression of the edition prints, thus creating the unique thread embossments. 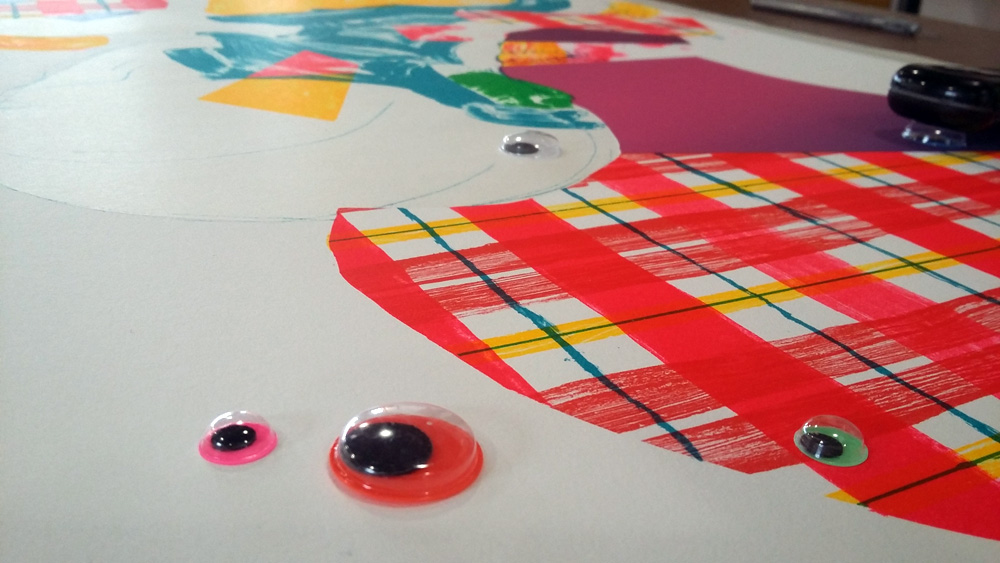 “Two Things Happening at the Same Time” is a noteworthy piece by Rashawn Griffin, addressing issues of self and identity in his beautifully typical manner of taking his art seriously, but not himself. It is powerful in its subject matter, arresting in its composition and coloration, and elegantly quirky in its presentation. All very much Rashawn.