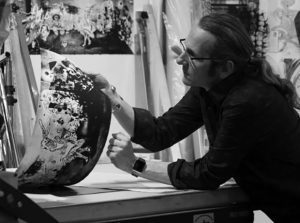 Children's stories are the wonders we grow up with. The mystery, the charm, the fantasy and the illusion. Tribal peoples have known this for thousands of years as All Things Are Connected, while others may recognize this as Newton’s 3rd law with a moral value meta-data. Charms unharnessed by age. Learning about my families’ past and reading Shakespeare’s Tempest or Defoe’s Robinson Crusoe make these connections for me. Listening to today’s world news tells of Poe’s The Masque of the Red Death. Some stories and traditions never change. Such stories are found within all tribes, as we are all from tribes at some point from somewhere. Entertaining, teaching and sharing. Rabbit, Coyote and Raven are tricksters that help narrate my stories of tradition and identity. Storytelling is our first written language. As I listen to the world news, popular culture and my Elders I practice our first language.

About Neal Ambrose-Smith: Neal Ambrose-Smith, descendent of the Confederated Salish and Kootenai Nation of Montana, is a contemporary Native American painter, sculptor, printmaker, and Professor at the Institute of American Indian Arts in Santa Fe, New Mexico. He has also developed an app Artist Ideas with 100 ideas for making art, available for Android and Apple. His work is included in the collections of many national and international museums and institutions, including the New York Public Library, the Smithsonian National Museum of the American Indian, Galerie municipale d’art contemporain in Chamalières, France, and Hongik University in Seoul, Korea. He received his BA from the University of Northern Colorado and MFA from the University of New Mexico.