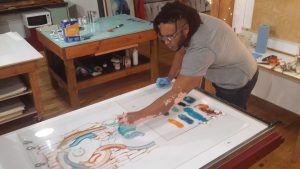 Two Things Happening at the Same Time, is a continuation of Rashawn Griffin’s investigation into materiality, drawing, and identity. Starting by “re-imagining” the Griffin family tartan, in new and saturated colors, the image was created in the lithographic medium, each plate hand rendered and hand printed on a direct pressure lithographic press, composing the final image. With additionally added hand elements, such as plastic eyes, thread embossment, hand stitching, and chine-colle’, this pattern is abstractly collaged, weaved, and manipulated into portraiture, both masking and revealing identity in two ways at once .>> Read more

Artist’s Statement / The making of the work

Rashawn Griffin was born in 1980 in Los Angeles, California. Living and working in New York City and Kansas City, he received a MFA from Yale University in 2005. He was a 2006 resident of the Studio Museum in Harlem’s AIR program. His work has been exhibited widely, including the 2008 Whitney Biennial, a the two-person exhibition at the Studio Museum (RSVP), as well as “Freeway Balconies” at the Deutsche Guggenheim in Berlin, Germany, and “Black Now” at the Longwood Gallery in the Bronx, New York.  Recently the subject of the solo exhibition “A hole-in-the-wall country” at the Nerman Museum of Contemporary Art in Overland Park, Kansas, as well as the group exhibition “Minimal Baroque” at Rønnebæksholm in Næstved, Denmark.