"Wholeheartedly I can say that these monotypes are amongst the shops most successful collaborations to date, and ones which yielded two impressions so unique, so hard to read and understand their origins, and so strong in image and content, that I truly hate to part with them. And wish the lucky collector a great deal of enjoyment in the years to come!" -Aaron Shipps/Master Printer

Eight in the morning, Monday, Andrzej arrives at the studio and we stand over the two large sheets of paper, coffee in hand. “So. What would you like to do today?”

It’s like this with Andrzej; his thought process so materially oriented, decision-making rooted in a call and response of move and counter move, that my job becomes significantly easier on the front end. The day prior I’d laid out nearly a hundred leftover packets of ink for him to choose from and cleaned the press bed. Aside from that, all I needed to know was that he intended to make work around scanners. But not much more.

“Let’s start with the big sheet.”

I cued up some classical on the stereo while Andrzej culled out the inks he wanted to use. Slashing open each packet, squeezing it out of the foil onto the glass slab, modifying each with a dab of this varnish, and a dash of that to make the ink consistency into a viscosity best suited to the lush printings Andrzej intended.

Moving the largest sheet of paper to the press bed, Andrzej took ink knives into hand and began layering, troweling, and building ink onto the paper. Normally with monotypes, one paints or applies ink onto a surface of Plexiglas or copper placed on the press bed, then uses press pressure to transfer ink to paper. Today, however, we would be reversing that equation, Andrzej building layers on paper, then moving the ink forwards and backwards with the pressure of the press. Writing this makes the experience sound clinical, but seeing ink pushing out into pools by two to three thousand pounds per square inch of pressure is a very visceral experience, purple riding into green, green sliding into yellow, after which pulling up the tympan from the paper releasing a great hissing sound and ropes of wet ink. And. Something frankly just stupidly sexy. This is a practice of curiosity. The opposite of control. 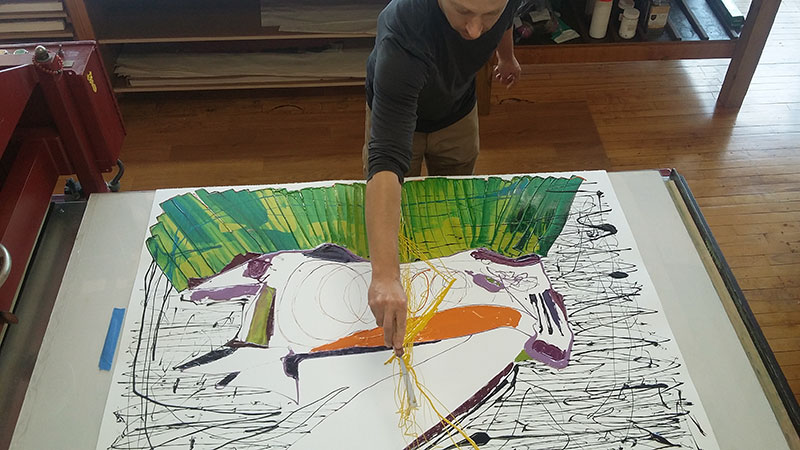 Over the next two to three days Andrzej and I printed layers both directly on paper and by Andrzej painting on the press bed, transferring ink, and in this way building up a rich, dimensional background. After each move, we would carefully pull up the wet paper and place the print up on the wall to study. Each time the paper getting heavier and heavier and the studio filling with the smell of wet ink. 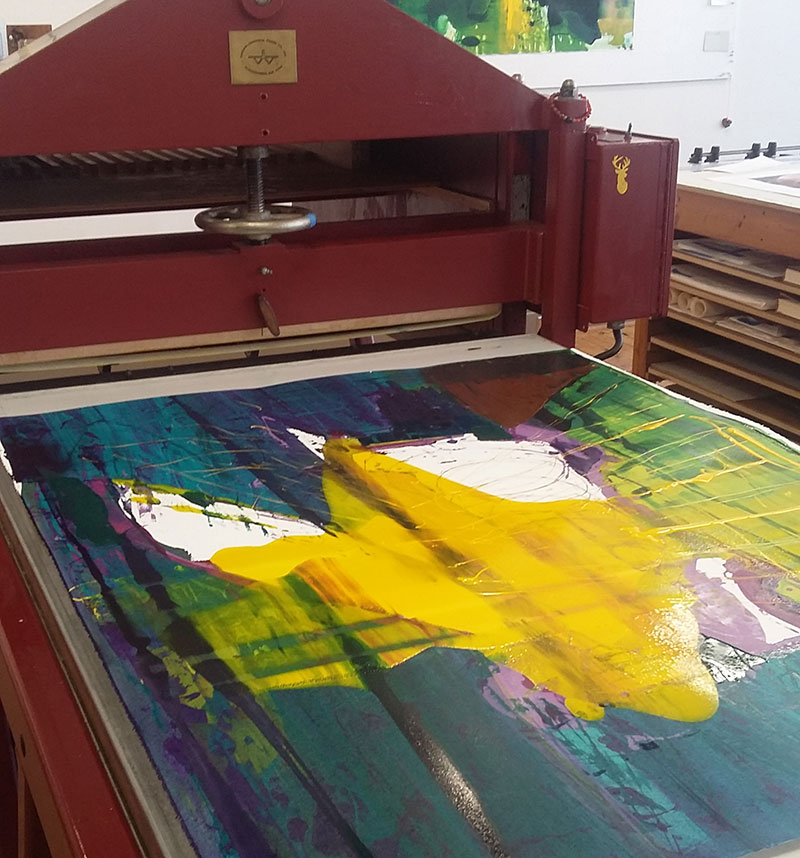 The bottom of the “Pink Shredder” gave us a gift, having a good rich squeeze of yellow and green which we agreed needed to be preserved in the printing to come, allowed to dry in its full dimensionality. And its still there indeed, grounding the print with oddity.

As Andrzej worked, one thing became evident. No matter how beautiful, no matter how interesting the surface, by the time he was finished with the next moves, the prior state of the impression would be eradicated in entirety. His signature Kamikaze approach to art making.

Like this, the days went by, both of us fully plugged into the experience; now adding some Chine Collé, and then Andrzej asking to pull in some lithographic techniques. Shifting process, I set up two plates for each print which Andrzej drew up with soft lithographic crayons. Afterwords, I processed the plates, then set up on the press bed. The unknown factor for me was how the plates would print given that the paper was now sealed so completely as to more closely resemble a plasticized surface than paper::::::: no way to know other than in the doing of the thing, so hail Mary, cross my heart and hope to die, and ink the plate, and print it. Pulling the paper, we now had a printing that strongly resembled an en caustic process or what you might see after pulling a pigmented stick of soft wax across a toothed surface. The same process was repeated the next day as a way to further lush up the bodies of the scanners. 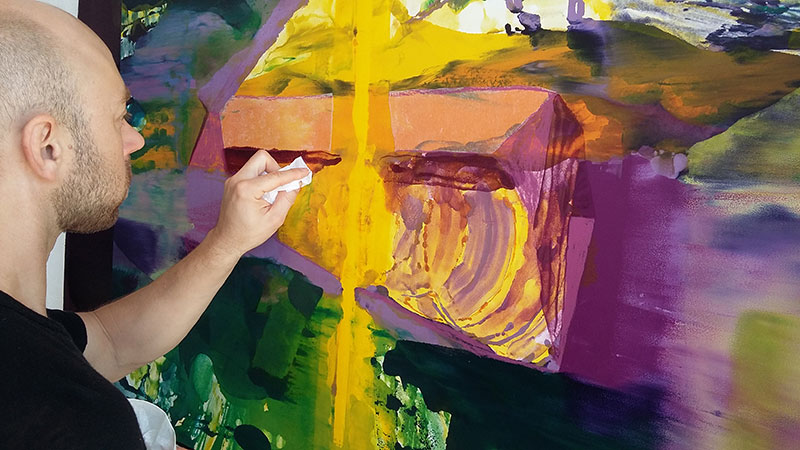 Towards the final days of work, Andrzej swung in a bold move, requesting that we print “borders” onto each impression. Truly, this moment made me hesitate more than any other. After all this time and work, this is exactly the kind of move that could just as easily kill an image as make it. And there would be no reversing the results.

Jumping in, I cut out a “frame” for Andrzej on a heavily toothed Mylar sheet which was registered to the print then press bed. Rolling out first a deeply rich purple, I inked up the Mylar heavily, afterwords carefully transferring it to the press bed so as to not touch or mar the inked surface of the Mylar. The monotype was then carefully placed face down on the inked Mylar and run through the press transferring the ink into a now rich, nothing short of lustworthy, perfectly clean frame, off centered, which printed into the paper most places, but laid more densely and darkly, on top of the richer printings of ink. An absolutely brilliant move. And one hell of a way to see forward on Andrzej’s part.

The pink scanner next had its white border printed on top, after which we dropped the scraper bar of the press one time within the frame of the print, on the right side, to apply pressure, and pull up a band of ink, showing its origins, and how it was made.

As if we did not already have two truly unique and fiercely stunning impressions on our hands, on the last day of work we both agreed that we would like to overcome the typically “dry” look of lithographic inks by printing a flat of “glaze” on top of each impression. For those who don’t know, a glaze is a mixture of transparent ink and linseed oil-based varnishes (and a dash of my own secret sauce), which is mixed together and printed onto an impression, giving it a permanently wet, rich look. Glazes, however do tend to yellow a bit with time if not mixed correctly, so I had to be careful to register the “Pink Scanner” so as to not glaze the white border…….. Inking the press bed, printing each impression, and pulling up the paper from the thick film of glaze, we agreed that the impressions looked a bit wet, so after cleaning back the press bed, each impression was placed face down on the bed, then run through the press one last time, nuancing the layer of glaze, allowing the more built-up layers of ink to read as quite shiny, while the less built-up layers, more matte.

The last move finally brought each print fully into fruition. Each embodying an undeniable life of their own.

Wholeheartedly I can say that these monotypes are amongst the shop’s most successful collaborations to date, and ones which yielded two impressions so unique, so hard to read and understand their origins, and so strong in image and content, that I truly hate to part with them. And wish the lucky collector a great deal of enjoyment in the years to come!

“Exploring technologies we as humans use to communicate, scanners in particular have a symbolic parallel with the print mediums, as both use surfaces to transmit and transfer data. This being the case, both monotypes were initiated using Bedrock’s lithographic press to drag, press, and pull printing ink across the paper without the use of stone or lithographic plate. This technique, used in the creation of the background of each piece, brings to life a luminous backdrop which is rich, dimensional, and very tactile, each one to be anchored by the geometrical body of the scanner itself. The bodies of each scanners were printed with the more exacting transfer of ink to paper from a lithographic plate overprinted several times, building up increasingly thick layers of ink.

Quite a few days, and many layers later, I decided to ‘crop’ the image with borders, suggesting that the image is on an actual scanner bed or has been printed out; and implicates the viewers eyes as the ‘real’ scanners.”

In Pink Scanner With Unknown Density Range….. 11 Stops?, yellow ink glows in and outside the scanning bed which rests on ‘coils’ seemingly stored with energy, yet may be an internal cord of the moving optical array. As is their nature, the light of scanners strikes intensely, making everything high contrast before dissolving it into data.

Purple Scanner With Colour Depth: Infinity Bits? implies a constellation of geometric shapes suggesting the three-dimensional object, and its world, seemingly pulling colors towards it in an implosion as data is reconfigured into a binary system.”
— Andrzej Zielinski, 2018